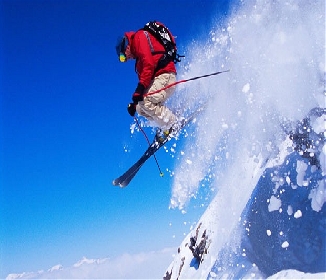 This winter season in New York City, a getaway from the frenetic pace of NYC might be just the thing to cap off your holidays or to set your year off on the right foot. Fortunately, New York is a great place to escape from, with three major airports and another three lesser hubs serving the region with all manner of flights to fun destinations – whether beach or snow.

If you’re looking to plan a warm-weather getaway from New York City this holiday season, then you’re in luck.  We’d suggest starting at the fantastic Airfare Watchdog site to ascertain what are the best deals currently going.  At many times during the holidays, flights can be cheaper than you think for the Caribbean, Mexico, and even Hawaii (though the latter is a much longer and more grueling flight.

There is also ample opportunity to escape NYC to beautiful cold weather destinations offering tranquility and solitude that serve as the perfect antidote to NYC’s hustle bustle workaday insanity and inanity.  Close-by destinations include the Catskills, Adirondacks, the Delaware Water Gap, and, for something totally offbeat, Montreal.  Farther afield, last minute bargains often exist for ski destinations, in Colorado, Utah, and even British Columbia.  The key is planning early, and putting in your own legwork – research-wise – on solid sites like Airbnb, VRBO, and Sidestep/Kayak.

Do I Still Have Time to Plan a Getway?

Of course.  It’s never to late to get out of NYC.  You’ll thank yourself later for motivating yourself to spend a special weekend outside of the city, where you can not go out drinking til 2AM, regret it, and wake up to do the same thing the next day. Not all of us can have the longevity of Dick Clark, and NYC eats up vitality at a blistering pace. It’s essential to escape!